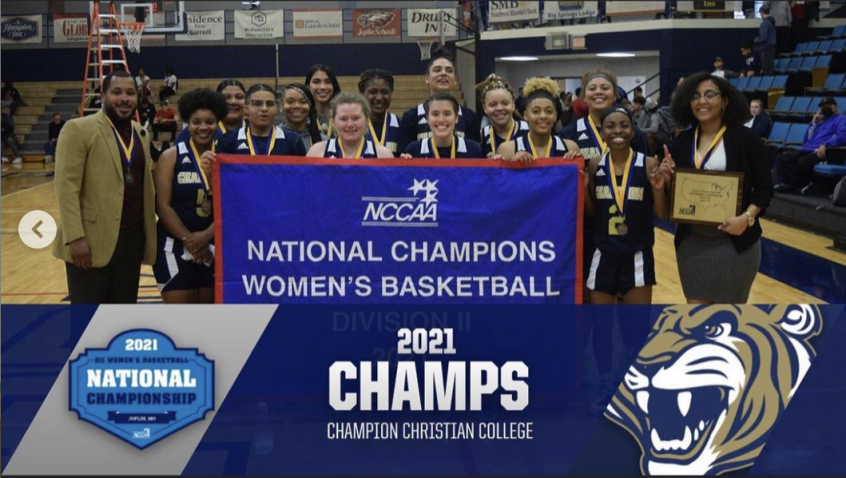 Ranked as a #2 seed upon their arrival at the league tournament in Joplin, Missouri, the Lady Tigers showed their desire to dominate the opposition from the moment they arrived. On the first day of the tournament, they defeated the #7 seed, Trinity Bible College, with a landslide score of 94-54. They went on to punch their ticket to the finals with a seven-point victory over the Baptist Bible Patriots.

The finals began with a 100-96 loss against Arlington, but Champion battled back to crush Trinity Baptist 85-54 and Pensacola Christian 84-69. Finally Champion avenged their earlier loss to Arlington by defeating the five-time defending champions 87-81!

Women’s head coach DeAnthony Ellison believes that team unity is key to this victory, stating, “The energy between the team was profound: everyone came together, the atmosphere was intense, and there was nothing but positive energy flowing from everyone.”  However, the corporate unity doesn’t negate the individual victories. Sckiya “Sky” Bannister was one such, earning 21 points and tackling the tough defensive assignment of keeping one of Arlington’s top scorers at bay.  Adding 18 points, 7 rebounds, and 9 assists, Tamaria “Nay” Manning was awarded Tournament Most Outstanding Player and named to the Tournament All-Star Team.  She is currently second in the nation in assists and is described by Coach Ellison as “the glue of the team…the type of player most coaches would love to pour into and have on the team.” Destiny Gonzalez, who recently passed 1,000 career points, led all scorers with 26 points, 15 rebounds, 3 assists, and 2 blocks. She was named to the all-tournament team as well as awarded Second Team All-American and NCCAA Student Athlete.

“This victory for Champion’s Lady Tigers is so precious for the women’s basketball program and the school,” says Coach Ellison, noting that the win made league history by coming from a second-year program.  “It was a great feeling to win a national championship but even a better feeling to see the smiles and so much joy portrayed from the girls; they have worked so hard for this moment on and off the court and to see them all come together and exhibit a genuine joy and happiness was such a special and proud moment for me.”

Champion would like once again to congratulate the Lady Tigers, Coach Ellison, and Assistant Coach Amalia Harris on this outstanding win! Want to see game highlights from the tournament as well as keep up with future games? Don’t forget to follow the Lady Tigers on their official Instagram account, @championwbb!

King of the Road!