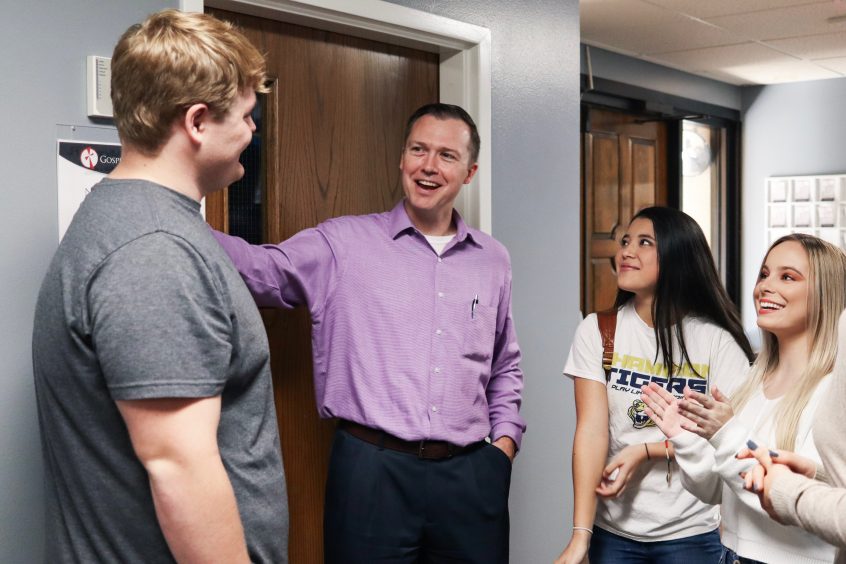 If you visit Champion Christian College on any given day, you’ll encounter our Executive Vice President, Dr. Jeremy Horton.  However, you won’t find him in an obscure office or an off-limits planning room.  Instead, you’re more likely to cross his path when he’s walking the halls, greeting coworkers, encouraging students, or helping in some mundane yet necessary area of daily operations.  We are so grateful to have an EVP who is not only an accessible servant leader but also an advocate for advancing the cause of Christ, and today, we would like to express our appreciation for his service.

Dr. Horton has been fully committed to Champion ever since his initial introduction to the school, which came in the spring of 2018, when he became acquainted with our former EVP, Dr. Shane Robertson.  The two pastors, who met at a church association event in Benton, Arkansas, became friends, and eventually Dr. Robertson urged Dr. Horton to become a Bible instructor at Champion for the spring 2019 semester.  After much prayer and seeking of God’s will, Dr. Horton accepted the position.  Since that time, his involvement with Champion has continued to increase.  Today, he holds the topmost leadership position under the office of President—the Executive Vice President, responsible for overseeing the harmonious functioning of the college and charting its future course.  Concurrently, he serves at the Champion-affiliated Gospel Light Baptist Church as the associate pastor, helping to disciple not only the students of Champion but also the congregants of Gospel Light.

In many ways, the Lord has been preparing Dr. Horton to hold this position throughout the course of his life experiences.  Although he was raised in a nonreligious home, Dr. Horton was introduced to Jesus Christ by his God-fearing grandparents, with whom he lived during his final years at Sylvan Hills High School in Sherwood, Arkansas.  Saved at the age of seventeen in the backseat of his grandparents’ car, Dr. Horton committed his life fully to the direction of the Holy Spirit.  The radical change in his life led to his future plans, including his educational choices.  One month into his college career at Henderson State University, he sensed the calling of God to become a preacher of the gospel.  In obedience to his Lord’s command, he received his BSE from Henderson before going on to acquire additional graduate degrees:  a Master of Theological Studies (2005), a Master of Divinity (2006), and a Doctor of Ministry (2008), all earned from the Louisiana Baptist Theological Seminary in Shreveport, Louisiana.

Dr. Horton brings more than just his extensive educational background to Champion, however; he also contributes his heart for ministry and his passion for growing young people into the image of Christ.  His top priority is his family; he was married on May 25, 2002, to his wife, Jillian, and the couple have since been blessed with four children: Noah, Anna-Kate, Abigail, and Adaline. Dr. Horton approaches the students of Champion with the same concern and care that he holds for his own family. Even today, with the responsibilities of such a weighty position, Dr. Horton continues to serve as an instructor, welcoming it as a way to be more personally involved with the needs of the student body.  He enjoys connecting with the students, encouraging them to grow in their walk with the Lord, and lifting them up in prayer.

In addition to his deep love for Champion, Dr. Horton maintains an attitude of humility and servanthood.  Instead of Executive Vice President, he prefers to consider his role as that of “servant helper to President Capaci.”  He also describes his approach to this position as threefold—watching, listening, and learning—and has stated, “Each day of service, my hope and goal has been to take note of both what it takes for the College to operate effectively as well as discerning the will of the Lord in His use of me.”  He is also committed to the concept of lifelong spiritual learning, acknowledging that his fellow staff and faculty have had a profound impact on his own walk with Christ.

Although he is self-effacing, however, Dr. Horton is unashamedly bold in casting the vision for the college to move forward.  Under the blessing of the Lord, he has developed a panoramic view for how he would like the college to appear in five years.  According to this vision, in the fall of 2024 Champion will have a steady enrollment of two hundred students, both on campus and via distance education platforms.  Of this number, 40% will be seeking degrees in church ministries.  Dr. Horton has also set his sights on a number of peripheral goals, both larger—achieving regional accreditation, implementing a secondary education degree program, introducing men’s football and women’s volleyball to our athletics department—and smaller—opening a gift shop to sell Champion memorabilia, inviting alumni to share testimonies during chapel services, and renovating the existing computer lab.  A courageous leader dedicated to shepherding the school in the direction God would want, Dr. Horton is the perfect captain to navigate the college through these unfamiliar waters.

Dr. Horton fills many roles—pastor, husband, servant, educator, dreamer, father, mentor—but he would be the first to say that his most important role is that of Christian.  His faith is not contained to Sunday mornings but ist he centerpiece of his life and evident in his daily conversations and moments of interaction.  Truly, it is his obvious love for the Lord and for Champion that makes Dr. Horton the dynamic and dedicated leader that he is.  At Champion Christian College, we are blessed by his presence, and we look forward to the future he envisions.