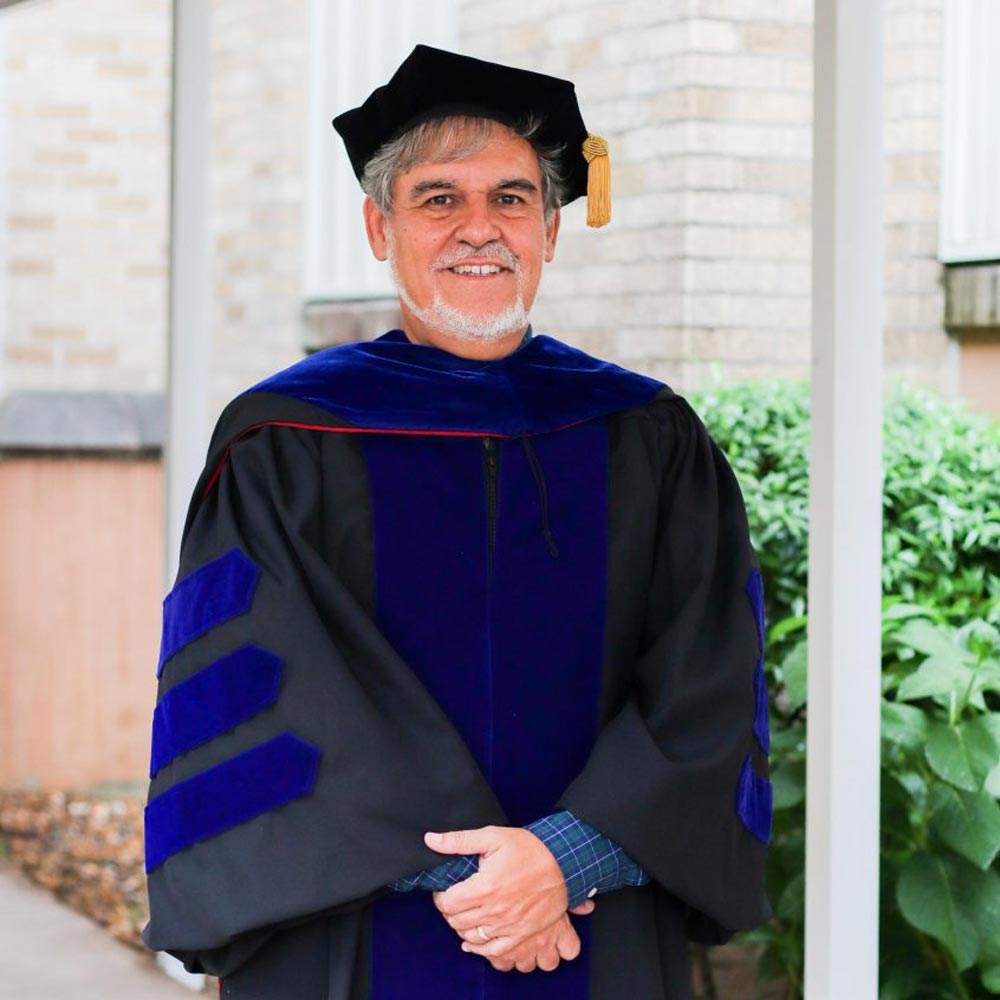 Champion Christian College is excited to announce a shift in our administration:  Dr. Elsen Portugal has been appointed our new Vice President of Academic Affairs, and Mr. Kevin Connor has assumed the role of Registrar!  We are thrilled to welcome these two men to these positions.  Their experience has been diverse and extensive, but even more important than their credentials is their shared love for spreading the truth of God’s Word with the world.

Although he has taught music and church ministries courses at Champion for many years, this is Dr. Portugal’s first opportunity to serve administratively at the college.  He brings an impressive academic background to this position; he holds a master’s degree in music from the University of Central Arkansas and recently earned his Ph. D. from the B. H. Carroll Theological Institute.  His doctorate degree is in ethnodoxology, his special area of focus, which refers to the application of indigenous music and the arts in worship and missions.

In addition to his academic prowess, Dr. Portugal has been involved in ministry for over three decades.  He served as a minister of music in New Jersey and Brazil, as a missionary in Germany for eleven years, as a foreign missions short-term leader, and as a professor and accompanist at National Park College, Champion Christian College, and Ouachita Baptist University.  Through such avenues as leading mission trips, writing, and directing workshops, Dr. Portugal and his wife, Michelle, continue their commitment to advance the cause of ethnodoxology in conjunction with the Global Ethnodoxology Network.

Like Dr. Portugal, Mr. Connor has a passion for reaching other cultures with the gospel.  During his childhood, his family traveled extensively to accommodate his father’s vocation in the aviation and oil industries; by the time Mr. Connor was seventeen, he had lived in twenty-two different places, including several states in the US as well as multiple foreign countries such as Thailand, Greece, and Iran.  Having accepted Christ at a young age, Mr. Connor earned a bachelor of science degree in missiology and devoted his life to the ministry.  He first served as an assistant pastor in Texas, where he led a team of over 400 volunteers in a children’s ministry that served 2,700 individuals weekly.  After seventeen years in this position, the Connors obeyed God’s call to take the gospel overseas; for the next fourteen years, they lived in China as missionary-teachers, spearheading a team of twenty missionary families dedicated to sharing God’s truth with the Chinese people.  Although the Connors were unfortunately forced to leave China in January of 2020, they are excited now to be involved in the work of God at Champion and affiliated Gospel Light Baptist Church.

Both men understand the importance of family.  Dr. Portugal and Michelle have four children and seven grandchildren.  Mr. Connor and his wife, Paula, have been married for over thirty years and have had five children—one daughter and four sons.  Their daughter passed away in October 1992, but three of their four sons are married, and Mr. and Mrs. Connor have seven grandchildren.  Their wives and children have been integral to the ministries of both these men.

“It is a great honor to come into this position at this instance in the life of Champion Christian College,” states Dr. Portugal.  “I am truly thankful for the opportunity and look forward to the opportunities the Lord will afford me to collaborate in the advancement of His Kingdom through academic training and discipleship.”

Mr. Connor agrees:  “I am looking forward to serving with the great team of people here at Champion as well as getting to know the students and to be a part of their lives.”

With their hearts for the students, for biblical education, and most importantly for the Lord, Dr. Portugal and Mr. Connor are welcome members of our Champion family.  We are honored to serve alongside them, and we can’t wait to see what the Lord has in store.  The next time you’re on campus, be sure to greet these two godly men and let them know how much you appreciate their devotion to the cause of Champion and above all, the cause of Christ!